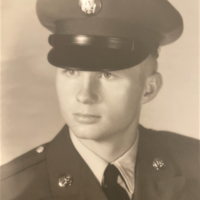 Arnie passed away peacefully at 8:30 on Tuesday, December 28, 2021. He was the youngest child of Lewis and Agnes Krushensky. He was born in Belfield, North Dakota but the family moved to Montana hoping for a cure for his mother who was diagnosed with Hodgkin’s Lymphoma. She died when Arnie was 5 years old.

After graduating from Billings High School, he joined the Army and was stationed in Germany. Following his discharge, he started his career working for Peter Kiewit Construction Co. as a transport driver. He later worked hauling cars for Commercial Carriers and Hadley Trucking. Arnie loved his job and easily made friends everywhere he went. His fellow truckers knew him as” The Pollock”, this became his C.B handle. While living in Pocatello he met and married the love of his life Sharon K. Krushensky. They celebrated their 53rd anniversary last August. Days after the wedding they dived full force into the construction life, buying an 8 wide trailer and moving from job site to job site building roads. Ultimately, they landed in South Jordan, Utah. This is where they would call home for 39 years.

Arnie was a jack of all trades. He could fix anything and was very economical. It never surprised us that on any given trip to the dump he would bring home more than he dropped off. He felt that one man’s garbage was his treasures, and he usually used what he brought home. A common joke from his friends and family was “if Arnie had duct tape and bungies, he would fix it.” Unfortunately for my mom, this frugalness carried through to his decorating skills. When the glass broke in my mom’s beautiful wall sconces, he surprised her with 7-11 gas station cups to put her greenery in. They fit perfectly! He was so excited and could hardly wait to show her. When my mom saw this display, she smiled and thanked him. They hung on our wall for years. She is a much better women than I and this made for many laughs. I have since learned to treasure his creations, asking for several of them to be left to me in his will. He was a hard worker and would be the first to pitch in when a neighbor or friend needed help. Arnie was known as a talker to anyone who would listen. Somehow, he would eventually turn the conversation to his kids or grandchildren as he was so proud of them and loved to brag.

He is preceded in death by his parents Lewis and Agnes Krushensky; and his sister Laura Kovach; his brothers George, Herb, and Ray Krushensky.

Funeral services for my parents will be held on

Graveside dedication immediately after at

My Dad took his LAST long-haul trip. He will be Missed!

Watch over him and bless him Lord, and keep him in your care,

may he feel our love for him, is my humble, heartfelt prayer.

To order memorial trees or send flowers to the family in memory of Arnold F. Krushensky, please visit our flower store.