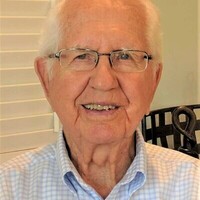 Ardene Ray Bona, beloved husband, father, grandfather, great-grandfather, and friend, was called home peacefully after a full and beautiful life on Tuesday, September 14, 2021 from his home in Salt Lake City, Utah at the age of 94. He was a devoted family man, a true friend, an entrepreneur, a WWII veteran, and a faithful, lifelong member of The Church of Jesus Christ of Latter-day Saints. Ardene will be remembered for his optimism, his easy laugh, and his unfailing patience, love, and kindness towards his posterity and friends.

He left behind his beloved wife Sharon L. Bona, who loved him fully and cared for him tirelessly in recent years, and with whom he danced, traveled, served, and worshipped for the last 16 years of his life. Their gentle, steady natures were a perfect complement for their companionship.

Preceding him in death was his beloved first wife, Beverly Loveless Bona, who was the mother of his cherished eight children, and who passed away in 1991 after a strong and loving 40-year marriage.

Ardene was born on January 31, 1927, in Payson, Utah to David John Bona and Annie Jane Birch Bona, the last of their seven children. He grew up on a farm in Payson, learning to work with his hands, which later served him well in his profession. He played football and ran track at Payson High School before moving with his family to San Diego, California where he attended San Diego High School.

In March 1945, just after his 18th birthday, Ardene joined the Army to serve in World War II. After his basic training at Camp Roberts in California, and during his advanced infantry training in Alabama, the war ended. He served a one-year deployment to Japan and was honorably discharged in December 1946.

Eager for an education, Ardene studied Commercial Art at San Diego Vocational School, San Diego Jr. College, and his beloved Brigham Young University, where Beverly also attended school. He was a Cougar Club member for 50+ years and a BYU football season ticket holder for 30+ years--“loyal, strong, and true” to the end.

Ardene married Beverly Loveless on October 16, 1951 in the Manti Temple. They met while both working at Sears in Provo, and thus began a lifelong adventure of love and service. To begin their family life, they moved to San Diego, where Bevene and David were born. In 1955, they returned to Provo and welcomed Dean to their family. After moving to Salt Lake City, Brad, Peggie, Jack, Janet, and Marie were born in Murray between 1956 and 1964.

After early career experiences with Sears, Geneva Steel, and Associated Foods, Ardene started his own business -- an advertising sign shop -- and ran it from the mid-1960’s until his retirement in 2005, creating advertising and signage for many companies throughout the Wasatch Front. He used his own steady, beautiful writing hand for his clients’ advertisements.

When Beverly passed, Ardene faithfully carried on as a widower for many years.

Ardene fulfilled many callings and assignments for the Church in his life, among them service in four Bishoprics, on the Stake High Council, as Young Men’s Advisor, teaching adult and youth Sunday School, and 15 years as a veil worker in the Jordan River Temple--one of his favorites.

Ardene married Sharon Stephens Lallathin on January 8, 2005, after meeting on a plane ride to Branson, Missouri. Through this “divine intervention”, they were quickly inseparable. They enjoyed weekly dancing to live band music with dear friends at the Murray Arts Center and the Tenth East Senior Center. They traveled widely together, often visiting temples wherever they went. Ardene and Sharon loved studying the Gospel together, and especially enjoyed their assignment as part-time service missionaries for the Church, hosting visitors to the Conference Center from 2005-2008. They loved having their children, grandchildren, and great-grandchildren visit their home and supported them at baptisms, birthdays, and other important events.

Ardene’s devoted faith in Christ was fundamental to his life. He loved the scriptures and the words of the Prophets. He saw the good in everyone and told them so. In short, he lived a humble, covenant-keeping life, which will stand forever as an example and legacy to his family.

While we will miss him for a season, we are reassured by the promise of his resurrection and our eventual reunion with him, just as he is now reunited with our family members and ancestors who have gone before him.

A family viewing will be held Monday, September 20 at 11:00am at the Rosecrest 2nd Ward chapel, 3101 South 2300 East, Salt Lake City, followed by a 12:00pm family funeral service at the same location. A family graveside service and dedication will take place at 2:00pm at Valley View Memorial Park in West Valley City. The family asks that all attendees please wear masks for these services.

Friends and family  may attend virtually at: http://mywebcast.churchofjesuschrist.org/Events/saltlakecanyonrimstake

To send a flower arrangement or to plant trees in memory of Ardene Ray Bona, please click here to visit our Sympathy Store.

To order memorial trees or send flowers to the family in memory of Ardene Ray Bona, please visit our flower store.