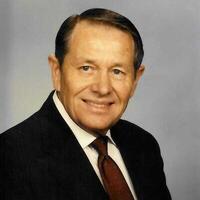 Arden David Sullivan, age 93, peacefully passed away on September 26, 2021 at home with his loved ones by his side. Arden was born October 4, 1927, in Roosevelt, Utah. He is the son of Thomas and Delora Wilkins Sullivan. He graduated from Roosevelt High School. He served during the Korean conflict. He married Delores Trane in 1954. Their marriage was later solemnized in the Salt Lake Temple in 1959.

They bought a new home in Granger in 1955, where they raised their children for 23 years. In 1978 they moved to their present home in West Valley. They cherished their many friendships in both areas, where they have spent many wonderful years together. Arden has been an active member of The Church of Jesus Christ of Latter-day Saints, where he has served in many callings. He and his wife enjoyed attending the temple together on a weekly basis for 21 years.

As a young man, Arden was fascinated with trucks. He had a long and distinguished driving career of 40 years at Clark Truck Lines. He loved his occupation and took great pride in being a conscientious and loyal employee. He was named “Driver of the Year” in 1962. During his years at ‘Clarks,’ he received two rings for over three million accident-free miles.

Arden’s pleasant demeanor and loving heart were a blessing to his family. Honesty and integrity were his policy. He was a devoted and loyal husband and father, who led his family with quiet strength and dignity. Being detail oriented and focused were a large part of his personality, always taking care of the people and things he loved.

Preceded in death by his parents; and three brothers, Rondo, Merlin, and Ormon; granddaughters Melinda Sullivan and Taulana Sullivan.

To send a flower arrangement or to plant trees in memory of Arden David Sullivan, please click here to visit our Sympathy Store.

To order memorial trees or send flowers to the family in memory of Arden David Sullivan, please visit our flower store.