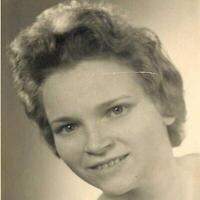 Our Mother came to the USA in 1959 by ship with her parents; they met with her sister Margot who came earlier and had a place waiting. Mom grew up in Untersiemau Germany, she had a pet goat she named “Liesel” who went everywhere with her. On Sundays, Anni would walk door to door gathering up all the little children to take them to Sunday school.

Once settled in the states, here in Utah, Mom met our Dad Tearl Jensen at a bus stop near where they worked;  Dad at Union Pacific R.R and Mom at Stover bedding.

Mom worked in housekeeping for YWCA for many years and then University of Utah hospital. She made many long-time friends there. Anni had many hobbies she enjoyed to do such as Crochet and /or knitting Doilies along with Afghan blankets and putting together puzzles.  She also enjoyed going to church bingo and had many friends there.

Due to current events, we will have a gravesite only services at the Salt Lake City Cemetary that will be held for close family and friends on Tuesday May 19th 2020 at 11: 00 AM located off 11th Ave on 1150 East Elm Ave 380 N. We will have a backyard Memorial later in day at family home 667 So 1200 West in Salt Lake City.

To send a flower arrangement or to plant trees in memory of Anni Margaret Bartko-Jensen, please click here to visit our Sympathy Store.

To order memorial trees or send flowers to the family in memory of Anni Margaret Bartko-Jensen, please visit our flower store.