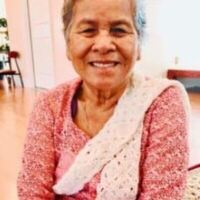 Ang Houn, 81, passed away on February 25, 2022, surrounded by her loved ones in her home in West Valley City, Utah. Ang was born in Battambang, Cambodia to Thorn Pan and Cheng Houn. She was married to Thuot Hoeun, who passed away in 1976 during the Khmer Rouge Regime. Ang and Thuot had ten children together, but five of them did not survive before and during the regime. She is survived by her daughters and sons: Som Hoeun, Sear Hoeun, Keana H. Net,  Konica Hoeun, and Danny Hoeun. She is also survived by 11 grandchildren and 1 great-grandchild.

In 1979, Ang bravely escaped with her five children to the border of Thailand at the end of the Khmer Rouge. Ang and her children spent four months at the Khao-I-Dang refugee camp. Soon after, they were moved to another refugee camp called Sa Kaeo II for one year and were transferred to several different camps afterwards. In 1983, Ang and her five children came to Utah as refugees, moved to California for one year, and settled back in West Valley City, Utah.

Ang is known for being a loving mother, grandmother, and friend to the Cambodian Buddhist community. Her grandchildren know her for sewing sarongs and pajamas for them to wear. Ang had a contagious laugh. Ang was a traditional Khmer woman who was known for her independence. She loved to travel to different states and to visit her home country, Cambodia. She will be truly missed for her warm, kind, and generous heart towards family and friends.

To order memorial trees or send flowers to the family in memory of Ang Houn, please visit our flower store.