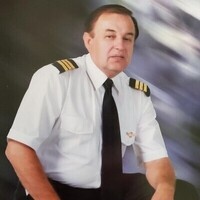 Andre Kostrzewa, age 72, passed away from injuries sustained in an airplane crash in Centerville, Utah on June 25, 2020.

Andre was born in Poland on November 16, 1947 to Peter and Otylia Kostrzewa, and grew up in a little town outside of Warsaw. He spent part of his young adult years as an electrical technician and as an outspoken activist against the communist regime. He made the hard decision to leave everything he knew and fled Poland, traveling around Europe for 2 years until 1982, where at the age of 35 he immigrated to the United States of America as a political refugee. He first settled in Idaho where he had a daughter with his first wife. He then relocated to Utah where he settled down and lived with his love of 24 years, Thu Thi Nguyen, until his death.

Andre was a very driven individual, best described as being an entrepreneur and inventor. He pursued his interests with vigor, never letting go of his vision until he could see it to completion. Andre did not know a stranger and found a friend in almost everyone he met. Which meant he met a lot of friends as he enjoyed traveling and had an extensive career as a long-haul truck driver, enabling him to meet many people in all corners of our beautiful country. Andre’s true passion though was in aviation and after coming to America he obtained his private pilot’s license. Andre dreamed, breathed, lived and talked about everything related to airplanes and flying. He enjoyed building model airplanes which eventually began a hobby in building kit planes in his garage. His first kit was an ultralight which never quite left the ground, but the thrill of the experience initiated a drive to build something bigger and better. He eventually went on to complete two separate single engine experimental airplanes, the latter of which claimed his life.

Andre is survived by his wife Thu; daughter Tracy (Adam) Wright; granddaughters Aliya, Avery and Karly; siblings Edward (Helena) Kostrzewa, Regina (Roman) Czerederecki; and many nieces and nephews. He is preceded in death by his parents; and brother Adam Kostrzewa.

A Memorial Gathering will be held Wednesday, July 1st from 6:00 until 8:00 PM at McDougal Funeral Home, 4330 South Redwood Rd, Taylorsville, Utah. The family asks that no memorial contributions be made.

To send a flower arrangement or to plant trees in memory of Andre Kostrzewa, please click here to visit our Sympathy Store.

To order memorial trees or send flowers to the family in memory of Andre Kostrzewa, please visit our flower store.