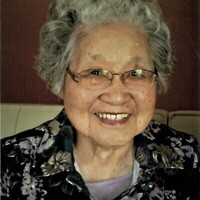 Matsuye Alice Miyamoto Ogura passed away peacefully on February 8, 2022, at her home in Taylorsville, Utah. Alice was born on November 19, 1919, in Florin, California. She grew up on a farm near Turlock, California with her five brothers: Kaxumi (Ed), Kaname (Ben), Kenso (Clark), Norio (Dave), and June (Fred). She graduated from Livingston High School. When World War II started, her family was sent to Amache Relocation Center in Colorado.

We would like to give special thanks to Jun and May Sudoko and Diane Glaser for all they did to help Alice over the years. Thank you to the kind people from Intermountain Hospice.

To order memorial trees or send flowers to the family in memory of Alice Ogura, please visit our flower store.